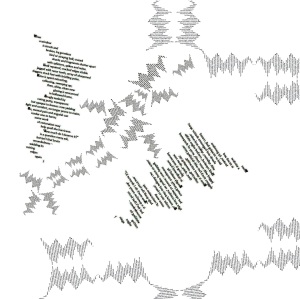 I used many replications of the angular, spiky form of the text of Presents of Mind’s fourth piece, ‘Broken Pane’, to make a derived image: ‘De-Structure’, part of which is shown here.

The fabric of an ordered, connected system is being torn apart, attacked by an airborne, fire-breathing dragon, which is composed of the twenty rudimentary pieces severed and missing from the former whole.

Visible in the nodes of the rest of the grid-like framework are whirling gyroscopes – emblems of vitality and inner energies – which are diminished and unbalanced with proximity to the damaged zone.

You could look at this in different ways.

Is it the psyche, resilient in part, but suffering the ongoing assaults described in the piece, where wounds and woes multiply, continuing their proliferating harm long after they began their disturbing work, in new forms of self-sabotage? The injured fabric is electrified, alarmed, while the dragon-brute appropriates the parts it destroys and feeds on the energies it steals, to become blacker still.
And yet, isn’t it also just a puffed-up, winged worm?
Could there even be a good purpose being served by this seemingly toxic process – maybe as a perpetual witness to honour the original wounding?

Or is this the marshalled resolve and courage of assertive resistance in action, strengthened by the restoration of self-esteem, taking down the steely bars of an imprisoning structure, its brittle rigidity, lifeless rules and suffocating limitations. The freedom-fighter recapturing for good the hijacked powers and faculties once used to suppress, oppress and depress.
And are these bars of another’s making, or one’s own – or both?

Is this the work of unacknowledged, alienated psychological fragments at odds with the powers of repression, or seeking to consume rather than be consumed?

Or a vignette of a moment in a cyclic motif: the tired, old frame being dismantled, while the sum of its fluid energies is preserved and repurposed, to be rebuilt and expressed anew in another, as yet unknown, form? Growth to be obtained perhaps by naturally reformulating an outmoded, inhibiting regime into a new better-fitting skin?

A reader told me she thought I had made a mistake in calling this a book about therapy – that it is much more than that. I think we are both right. It is about metaphors of the mind as a world, and the world as a mind: cellular, individual and universal struggles for identity and wholeness, and balances and transfers of power; personal tensions within the mind, and those existing between minds, communities, and alliances on any scale.

The sharp, jagged, shattered shape of the original piece*, looking also like an archetypal ‘wicked witch on a broomstick’, has resonance with its words – about the repeating nature of visitations of woundedness and harm. ‘De-structure’ amplifies this and broadens its relevance.
This is an example of what I mean by metaphform – where themes flow like an underground river through both the poetry of a piece and its form – and also its derived imagery.

*Curiously, it also resembles an upside-down map of the UK, where some of these issues are being played out now, in relationships internal and external.